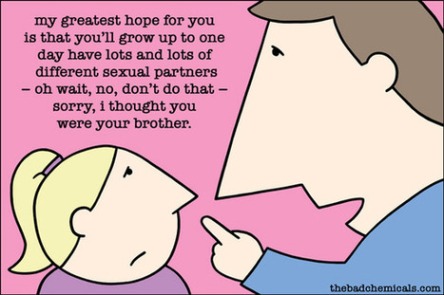 This particular post came about during several conversations with both men and women.  When I reference “sex” in this post I don’t just mean the physical action, but everything that comes along with it…you know, kissing, touching, talking, dating, friends with benefits, and so on.

I’m an Aries so I’m passionate and at times crazy in all aspects of my life.  I have always been the one in the group with the blunt opinions, the harsh words, and the loudest and best jokes.  I’m a people person, I live in the moment and my past has taught me to not be consumed with other people and their thoughts or negativity.  Now knowing this about me, it is also important to note that most days I’m at work and most nights I’m at home watching television, doing homework for my graduate program or being crafty in some way, shape or form.  I cook, I clean, I set goals, I achieve them.  However, despite all of the wonderful things that make me a strong, creative, fun, loving woman, there are men (maybe the word “boy” is more appropriate within the context of this post) who feel the need to place their judgments on not just me, but most of the women that surround them.

Are we not allowed to have fun just like a guy and still be all of the amazing things that we are?

I’m starting to wonder if men really DO have a separate rule book to life that only they are allowed to read and follow.  Men can go out and party every night.  Sex to them is like a sport…the more women they can bag, the better.  They can be rude, disrespectful, cheaters, etc., but the second a woman does even a fraction of what they do, there seems to be a problem.  If a woman dates more than one guy at a time, she’s fast.  If a woman is in her 30’s and single something must be wrong with her.  If a woman is a sexual being, she’s a hoe.  A guy can bang you, your friend, and your cousin all in one month and among their boys it’s funny or they get a high-five as if they just won a sporting event.  If a woman so much as looks at or kisses a guy in the same circle as someone she was once involved with, the world literally comes to an end.  Why is that? Are women not allowed to be sexual creatures?  Do we not have desires?  Are we not allowed to have fun just like a guy and still be all of the amazing things that we are?  Why can a man get a high-five, yet we get shamed for doing only a smidgen of what a guy does?  These are questions that I need answers to, people!

I honestly don’t think men were built to be monogamous creatures.

One of my female friends asked me recently, “Is it so hard for a guy to show some restraint and not cheat?”  My response was simple.  I honestly don’t think men were built to be monogamous creatures.  I think they were wired to think in the physical.  Some men can get past the temptation, while others indulge.  With that said, if men are built this way and can have sex without feelings, then why can’t a woman? Why is a woman judged for doing the same exact thing?  Is the foundation of why the double standard exists that, “this is just how men are”?

A man is built to be sexual, but no man wants a woman that’s too sexual.

I decided to go straight to the source and ask some of my guy friends what exactly goes into their thought process.  Why can men get away with doing whatever they want, but women get labeled and shamed?  I also asked, why do men cheat?  They were honest and in return, I will leave their identities anonymous.  Plus, if their ladies knew what they really thought…they wouldn’t be happy campers.  Here are the top 5 responses I received:

Yes, ladies…this is what some men are thinking.  In my opinion…to hell with double standards.  What a man can do, a woman can do better…right?  The responses you see above are from actual people, in real relationships, with real women.  If you ask me, this alone is enough reason as to why we shouldn’t care what the double standards are…men certainly don’t care about implementing them.

Here’s a funny video on double standards that you may find interesting: