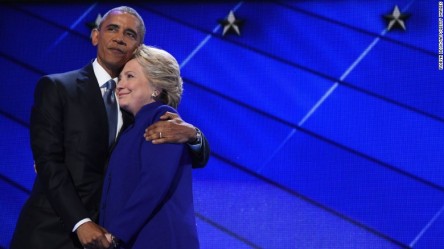 As the DNC begins to wind down, last night was filled with many speeches aimed at criticizing Republican nominee, Donald Trump.  Some of the speakers included Vice President Joe Biden and Democratic Vice Presidential nominee, Tim Kaine. The evening was filled with one-liners that will more than likely stick in the minds of many Americans that simply don’t want to see Trump in the White House.

“I promise you, our strength, our greatness, does not depend on Donald Trump…the American Dream is something no wall will ever contain.” ~POTUS

Of course, the night belonged to President Barack Obama. We were all given a reminder as to why Obama is loved by so many. His speech was filled with words of affirmation toward Democratic Presidential nominee, Hillary Clinton. Obama also reminded us why this country is not only great, but why we can’t afford to have someone like Trump in office. In case you missed it, see Wednesday night’s speeches below!