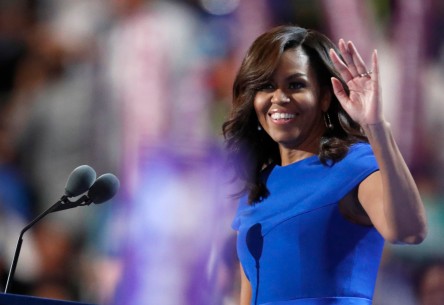 As the Democratic National Convention is underway in Philadelphia, there may be some things you missed.  The night was filled with speeches from entertainers and political figures alike.  Some of the more powerful speeches were delivered by Senator Elizabeth Warren and Senator Cory Booker, but the night belonged to former presidential candidate Bernie Sanders and most importantly, First Lady Michelle Obama.  Although the convention is a forum for Hillary Clinton to formally accept her nomination as the Democratic candidate, the crowd was filled with tons of Bernie Sanders supporters.  It was clear that he was loved by many (and still is) and there was an undertone of anger from supporters who believed he was robbed of his nomination.

The FLOTUS did an excellent job at delivering a speech that will be remembered for decades and may have even tamed some of Bernie’s angry and emotional supporters.  She painted a picture for everyone to visualize.  That picture was of a great country that accepted all, supported the disabled, protected and helped the youth, and took a stance on education for all.  Although the night began with some questionable guest speakers that seemed all to fraudulent and over-the-top, the night ended with a sense of unity and peace.  There is a goal in mind and that goal includes Bernie rounding up his troops to lend support and their votes to Clinton.  Check out Bernie and the FLOTUS below: