If you were like me last night, then you tuned in to the much anticipated TLC Movie that aired on VH1.  Let me dive right in!  I LOVED IT! Of course, there were cheesy, sub-par acting moments, but overall it was a success and mainly because of the awesome casting choices.  Surprisingly, Lil’ Mama was the best look-alike in her role as Lisa “Left-Eye” Lopes and Keke Palmer as Rozonda “Chilli” Thomas was a close second, with Drew Sidora as Tionne “T-Boz” Watkins coming in third.

Growing up on the female power group, TLC, I had chills for the majority of the movie while I sang along to classics such as, “What About Your Friends” and “Creep.”  There are no words that can truly describe how influential they were, not only in the Pop industry, but to young girls everywhere.  They educated a whole generation about safe sex and being confident, while sexy.  The toughest part was watching everything that they went through behind the scenes and knowing their reactions to tragedies that stuck them.  After watching an entire movie of actresses portraying one of my favorite female groups, it brought tears to my eyes to see clips of the actual trio at the end.  Kudos to VH1 for shedding light on what I believe is the real depiction of what happened during their rise to fame.  To throw you back, here is the actual What About Your Friends video, as well as the trailer for VH1’s TLC movie.

We’ve jammed to their hits, we’ve mimicked their styles and in some way, shape, or form became fans of the power house, all-female group, TLC.  It’s no secret that their story was a roller-coaster ride with their financial troubles being public knowledge and with the untimely death of group member, Lisa “Left Eye” Lopes.  The remaining members, Rozonda “Chilli” Thomas and Tionne “T-Boz” Watkins, have agreed to a biopic which will feature an interesting cast! 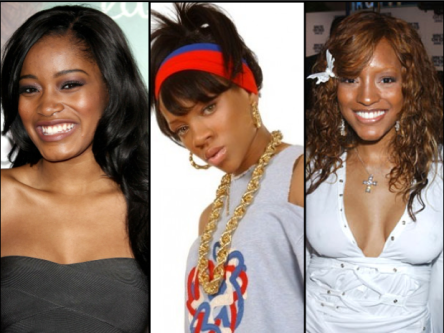 Chilli, Left Eye and T-Boz will be played by Keke Palmer, Lil’ Mama, and Drew Sidora (respectively).  Some heat is already being thrown towards Keke Palmer for not “looking like” Chilli, but she’s firing back at her critics.  Here’s what she had to say on Twitter, in response to the flack she’s been getting: 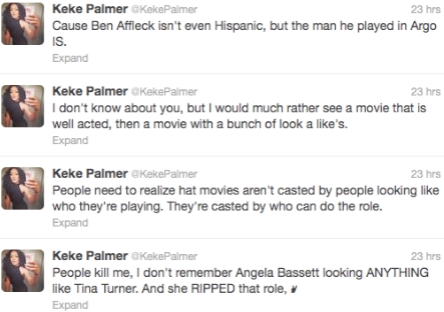 I’m sure the biopic will be a success and I look forward to seeing it!  Plus, Ms. Palmer is correct, I’d rather see a movie with good actresses, as opposed to actresses that simply look like who they are portraying.