So, you KNOW that I don’t do the ultra gossipy thing on my site (as in I don’t care if the baby is Beyonce’s or not!) so whatever pop culture buzz is going around I like to dig deeper and focus on the REAL issue.  Some of it is entertaining, but dang do we really care what a celebrity wears to Starbucks?  I don’t (even though I click on the link JUST to see if one of them is wearing a hairstyle or lipstick color that I like hee hee).  With allll of that said, I want to chit chat about the latest DRAMA/LOVE TRIANGLE between Chris Brown, Rihanna and Karreuche.  Clearly, it’s none of anyone’s biz-nass who he is boning or “canoodling” with behind the bleachers, BUT I think it’s going too far when ladies are cussing each other out over this fool via Instagram.  In a time when bullying is REAL and youngsters are killing themselves, it just creates attention around immaturity.  Some argue that celebrities shouldn’t be considered role models and others believe that their platform is powerful and can influence a lot of people.  I’m on the fence!  However, when I see this type of behavior, it’s hard for me not to cringe and wish that they would be smarter because people are WATCHING. Check out the convo that transpired between Melissa Forde and whoever else that is affiliated with Chris Brown’s ex:

Unknown User Sticking up for Karreuche: 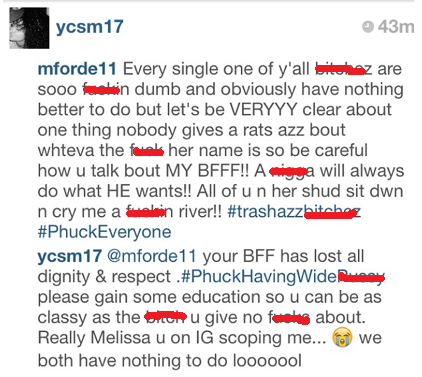 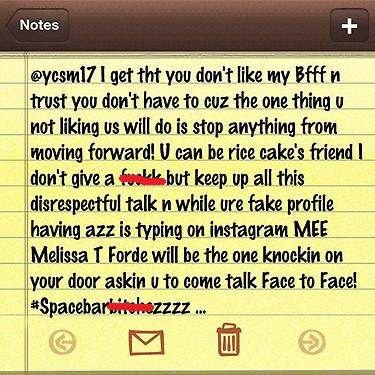 What do you think? Is stuff like this influential on others to bully?  Does it glorify something that is a never ending battle?