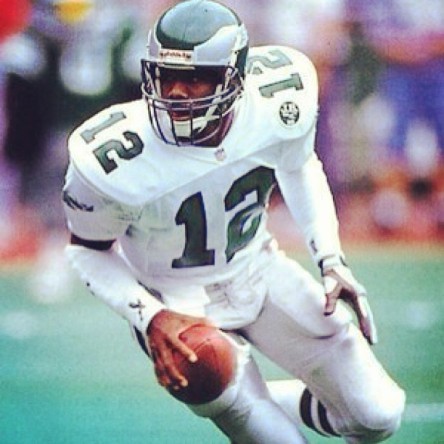 Back in the day, I loved me some Randall Cunningham and even got him to sign his rookie card, which I still have by the way.  The #12 was my favorite as a young Eagles fan.  Those days of watching him play are long gone now, but NFL.com got him to sit down for an interview, to reflect on his career.  He’s now a pastor of a church in Las Vegas and recently turned 50 (hello, my fellow Aries)!  Even RG3 has a connection with #12 as his dad was a huge fan!  NFL.com reports:

So take a seat, kids. Put down your phones and listen up: A few decades ago, there played a quarterback who never made it to a Super Bowl and never made it to the Hall of Fame — but whose ability as a dual-threat signal-caller foreshadowed the trends shaping today’s game. His fingerprints are everywhere.

Sure, Roger Staubach was an amazing athlete as a quarterback. Yes, Bobby Douglass set a long-standing record for a running QB, notching 968 yards on the ground in 1972. True, Steve Young had legs that merited the respect of defenders.

But Cunningham … Cunningham was different. And today’s quarterbacks know it.

“My dad loved watching Cunningham, so when I decided to play football, all we did was watch his highlights,” Robert Griffin III said Tuesday. “We’d watch how well he moved in the pocket to avoid defenders and make plays — not just with his legs, but with his arm. He was one of the first true game-changers the league saw…”

Check out his full interview and video on NFL.com by clicking the link below: