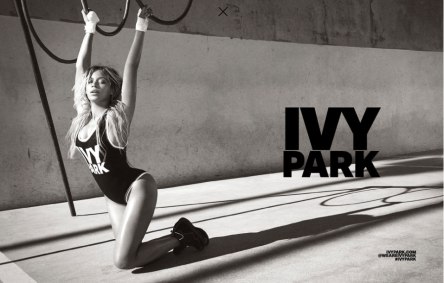 We haven’t heard much from her since the big Formation ordeal that got the world trending her infamous Superbowl performance.  But she’s back and better than ever!  Beyoncé has done it again…she has dropped another surprise on everyone.  Known for her powerful voice, sexy concert performances, acting roles and surprise album releases, Beyoncé can now add something else to her resume.  She has co-founded a new activewear brand, Ivy Park, that is made for “women who want to look and feel at the top of their game,” according to the brand’s website, http://www.ivypark.com

The brand name is a mixture of Jay Z and Beyoncé’s daughter’s name, Blue Ivy and Parkwood Park where she spent her earlier years running to prepare for performances.  In a recently released promo video, Beyoncé explains how this park is essentially her center.  She “goes” to this place before and during every major moment and milestone in her life as a way to not only remember where it all started, but to push herself.  This is the very essence of her brand.

The Dreamworld is definitely loving the new activewear pieces and we wish the mogul success.  As always, we hope that this inspires all of the dreamers out there to continue following their dreams.